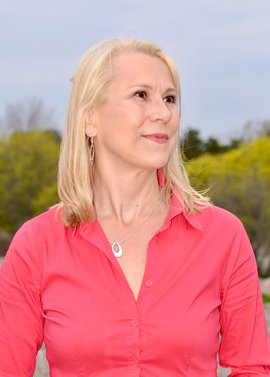 The composer Katarina Leyman, originally from the Island Orust on the west coast of Sweden, now lives and works in Stockholm. Her main instrument is the piano. During the years 1989-1995 she studied music in Boston, USA. During the first year her focus was on jazz and playing the piano, both classical and jazz. Then she turned to film scoring and finally to contemporary classical composition. She got a dual bachelor's degree in film scoring and composition at Berklee College of Music in 1993 and a master's degree in composition at New England Conservatory of Music in 1995. Back in Sweden she studied music theory pedagogy and composition at the Royal College of Music in Stockholm from 2002 to 2005. Her diploma concert took place in 2006.

Color and texture, shape and movement are often starting points, and form-building elements in her music. Ideas for compositions can emanate from various natural phenomena such as fish moving in shoals, DNA chains, water molecules, volcanic activities and clouds…

Katarina is the composer in residence for the Västerås Chamber Orchestra for the concert season 2022/2023 when four pieces, both old and new, will be performed. The main work is a commission for a viola concerto.

Katarina often collaborates with different musicians and ensembles in varied chamber music projects. The chamber music repertoire includes pieces for a range of solo instruments and ensembles of varied format. 2019 the CD Vattenklanger, a portrait CD featuring some of her chamber music was released. During the season 2017/18 Tales of Lost Times for solo viola was performed all over Europe. The piece was a commission by the Stockholm Concert and ECHO (European Concert Hall Organisation) for the ECHO Rising Star.

The major breakthrough was Solar Flares for large symphony orchestra, a commission by the Swedish Radio Berwaldhallen premiered during the Baltic Sea Festival 2010.